The face of war

Andre Breton was one of the original group of Surrealists who introduced the ideas of automatism and intuitive art making. He championed the cause of "found objects", mixed media, collages and chace associations. He also championed the use of art as anti-war statements. 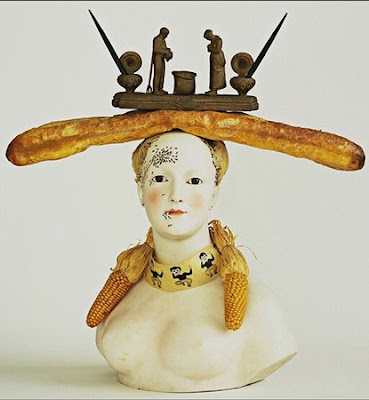 The Surrealist movement gave rise to several pieces of work like Salvador Dali's 'Retrospective bust of a woman' (1933). A baguette crowns the head of the woman. Cobs of corn dangle on both sides of her face. Ants swarm along her face, as if gathering the crumbs.
On top of all, is balanced an ink-well with a praying couple.


The movement also gave rise to the use of non-conventional materials in art and sculpture, like the wax sculpture by Edgar Degas, 'Little dancer of fourteen years' (1881), dressed in a real tutu skirt, a bodice, a wig of real hair, and with real ballet slippers. 28 bronze repetitions of the sculpture have been made since then by major museums around the world, for exhibition purposes. 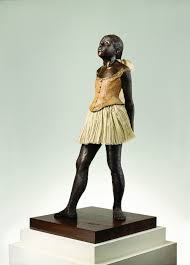 A recent sculpture using 'found objects', by 33 year old artist, entitled "The face of war" has captured the imagination of critics, fellow artists and art lovers around the world.


Russian President Vladimir Putin is the face of war in the 2-metre high portrait created by Ukrainian artist Daria Marchenko. The portrait has been made using 5000 bullet cartridges brought in from the frontline in eastern Ukraine. The first few shells were sent to Daria by her boyfriend, a member of the Euromaidan movement that worked against the corrupt and unpopular government of Viktor Yanukovych.


Now many of Daria's friends fighting across Ukraine send her bombs, grenades, shells and other war materials that they find, for use in her future compositions. 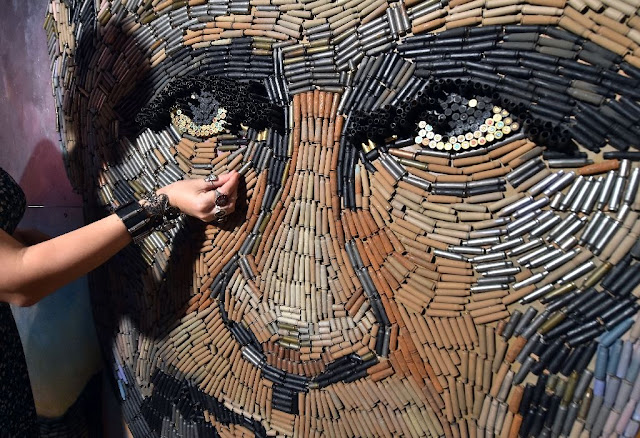 For Daria, each shell is the face of war, symbolising some one wounded or killed. She uses a hand-held light to cast interesting, elongated shadows across the portrait. Sometimes the shadows throw deep shadows around Putin's eyes, making them more sinister; at times, they make the face angular, more energetic and aggressive; and sometimes the shadows make the mouth more cruel. 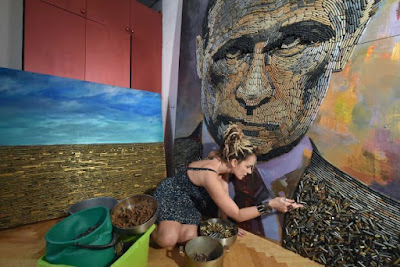 The portrait has eight kinds of cartridges, some corroded and copper coloured, some quite new and glistening gold. As people look at the changing expressions of Putin's portrait in the moving light- sometimes proud, at times contemplative, they have their own thoughts about the nearly 7,000 people killed so far in the Ukraine conflict.

The portrait is a dominating presence in Daria's studio.

"Sleeping in the same room with him was a bit scary at first," said Daria in a recent interview, "But I got used to it."
Posted by Unknown at 3:20 AM

Email ThisBlogThis!Share to TwitterShare to FacebookShare to Pinterest
Labels: art and society, meet the artist