Face to face with Yusuf Arakkal


Bangalore based artist Yusuf Arakkal was always interested in the human figure and human faces. He decided recently, to do a collection of portraits of fellow artists.

Here is one of his drawings: of the artist Thota Vaikuntam, captured at work.

Portraits are rare nowadays. The theme of fellow artists was also an unusual one.


All the portraits by Arakkal were pen and ink drawings using lines, and dots - no colours and no shading. They were drawn on reversed canvas, and executed in a 'framed-box' approach. Generally, it was all black ink, and single-tone backgrounds.


The collection of 135 portraits were on show at an exhibition called "Faces of Creativity", at Chennai, last month. Arakkal desired that the entire collection should be sold to a single collector or to an institution, to be available for viewing in its entirety.


The timing of the project was remarkable, given the news of his untimely demise today morning. It almost seems to be like a farewell gift from Arakkal to his fellow artists. 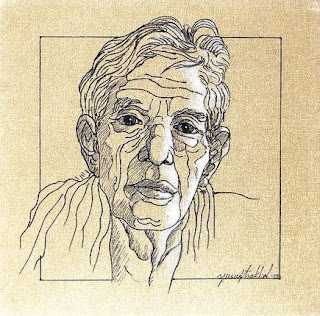 Young Arakkal was looked after well at his family home, but ran away as a teenager to Bangalore, driven by a desire to live life on his own terms, in the streets and alleys of the city, and to learn painting.

Young Arakkal studied at the Chitrakala Parishath, Bangalore. The linework was always strong, as in this portrait. He was fond of drawing, and he knew the strength of lines. 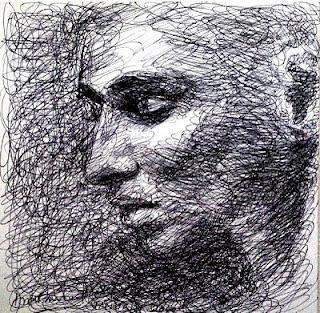 It was probably due to the influence of his early years', that several of his works showed the urban poor, the social outcasts and the alienated.

There was an air of despondency hanging in the air, even in the fine art-print he called 'Hope'. This print was created for the project 'Break the silence' by Art-for-humanity, an HIV-AIDS initiative.

Like the surroundings of his teenage areas, the walls and backgrounds in Arakkal's paintings often reminded us of peeling plaster, dirty cracking walls, and old, often dirty, make shift belongings.

They told a story.

Email ThisBlogThis!Share to TwitterShare to FacebookShare to Pinterest
Labels: meet the artist