A picture worth a thousand words and a film

The district of Morigaon in Assam is known for the place of occult, Mayang, the Pobitora wild life sanctuary, and the ferocity of its floods. 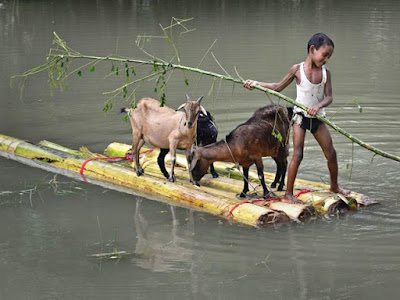 Ritu Raj Konwar, the Guwahati based special news photographer, was covering the floods in 2014, and clicked this photograph for "The Hindu". It showed a little boy carrying his goats to safety in a raft made of banana trunks, using the thin branch of a tree for steering through the flood waters.


While the Morigaon region sees frequent downpours, the 2014 floods were specially severe, with more than 2,00,000 people landing in relief camps. Even the rhinos of Kaziranga National Park were affected and several got electrocuted, and as in the picture alongside, the dead rhino had to be dragged away with the help of elephants. Unfortunately, the remote areas of the north-eastern states of India, do not get sufficient national media attention.

However, the photograph of the little boy carrying his goats, caught the attention of well known Malayalam film maker, Jayaraj, known for his art house films, as well as mainstream ones. He was inspired to make a movie about a little boy, and his grandfather, called "Ottaal", which he based on the Russian story by Chekhov, "Vanka".


Ottaal went on to win the "Golden Gateway of India Award" at the Mumbai Film Festival, 2015.
And Jayaraj recently went on to do what he was planning ever since he first saw the photograph. He tracked down the little boy, Ashadul Islam at his village Kuchani in Morigaon,Assam. 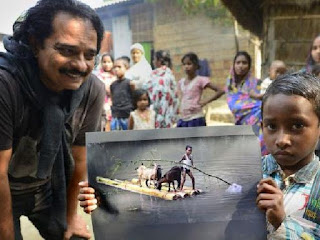 Jayaraj has announced he is going to look after little Ashadul's upkeep, health and education. Ashadul's parents are daily-wage labourers in a brick factory, and this help will go a long way for the family.

Jayaraj's visit also helped draw some attention to the small village of Kuchani, and its desperately poor people. Jayaraj's charity foundation has said it would look after the health needs of the village.

http://www.thehindu.com/news/cities/kozhikode/jayarajs-ottal-changes-ashadul-islams-life/article8006027.ece
Posted by Mita Brahma at 8:20 AM No comments:

Calvendo: A publishing house for artists

Calvendo was one of the first publishing platforms to enable creative artists to share their paintings, illustrations, digital art or photographs and self-publish them. 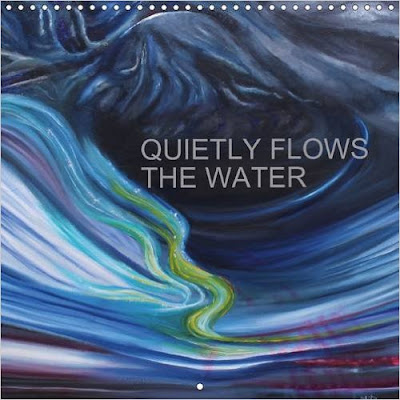 You can design calendars and poster books as print-on-order products.

I have to report a very happy experience doing my first calendar with them:

I recommend them highly to all artists!

Posted by Mita Brahma at 9:46 AM No comments:

Lending a voice to deaf artists. By design.

Smriti Nagpal learnt to use sign language at home, while communicating with her two older siblings who were hearing impaired. She would often help out with her special ability, her friends and at the National Association of the Deaf, while pursuing her studies in business administration, and then later at work. Apart from her ability in sign language however, she combined rare sensitivity as well as business sense. 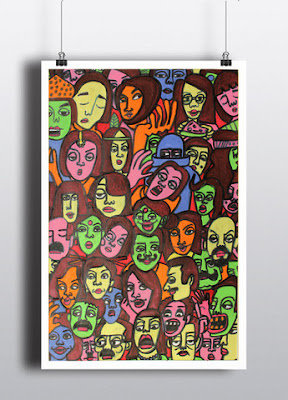 So when she met a hearing impaired artist, who was not able to reach out to the art community with his work, because of his disability, she decided to help. The result is an organization called "Atulyakala", quite simply: Art Unparalleled. It bridges this physical gap, and gets the artists to communicate with others in the field, and of course also with clients, customers, employers and suppliers.

Atulyakala sells from its website fine art prints like the one shown here, and also lifestyle products like mugs, bags and wallets. They work with artists and designers who can hear, and with customers of all types. They also hold workshops and events to create awareness about their work, and also because all of us who can hear need to be able to work with those who can't. 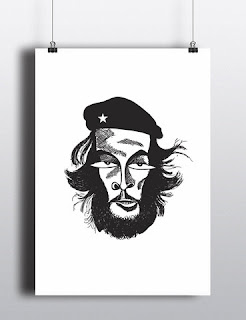 The amazing thing is Smriti, now 25, got all this going by age 23! She has got a lot of recognition now, specially with the under-30 young entrepreneurs' award as part of BBC's 100 inspirational women for 2015. She was chosen to interpret the Republic Day parade for the deaf community, on national television early this year.

Well, she has a lot to do. She does have her heart and head in the right place for it. For when asked by the BBC correspondent, on what advice she would give the viewers wanting to follow in her footsteps, she answered: "See few dreams, and follow them with all your heart, and the world will be right there, all yours!"
Posted by Mita Brahma at 9:46 PM No comments: