The Meena tribes of Rajasthan and Madhya Pradesh, India, trace their ancestry to the Matsya tribe of the Matsya kingdom (both "Meena" and "Matsya" mean fish in the Sanskrit language) that flourished in the 6th century, B.C. The women of the tribe decorate the walls and floors of their house with motifs drawn with a paste of ground rice and milk, or with a mix of lime and chalk powder. The floor and walls are first prepared by applying a paste of cowdung, a local clay and red ochre. This form of art, known as "Mandana" art, draws upon the surroundings of the village women, like birds, animals, leaf and flower motifs. 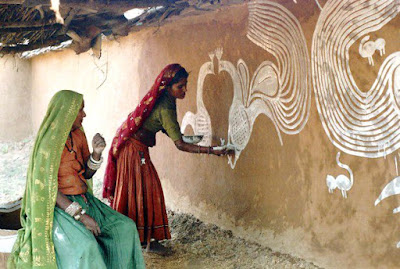 Madan Meena, an independent visual artist, recently held an exhibition of his paintings at The Triveny Gallery, New Delhi.  Using his personal association and research in the region and the Meena tribe, he has evolved his own language, using the traditional Mandana forms and a contemporary interpretation. 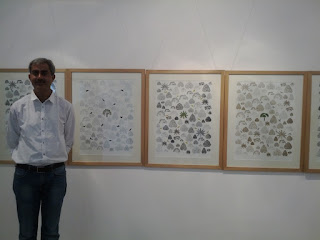 Three characteristics of the Mandana Art are:
the use of simple geometric forms: triangles, rectangles, circles; the community method of working, with groups of women painting together, each adding their own creations and embellishments; and the use of small motifs drawn from their surrounding objects, specially natural flora and fauna.

Madan Meena used similar techniques, presenting a "Bara-Masi" (or twelve-month) representation of Mandana art. He made clever use of the plant motifs and birds, specific to a season. For example, the peacock motifs in this composition represented the spring season. 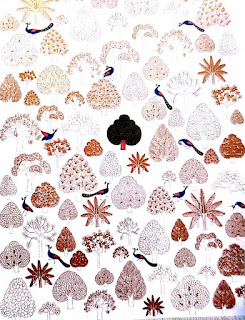 The Ranthambore national park area in Rajasthan once served as the hunting grounds for the Maharajas of Jaipur. Now they serve as a major wildlife tourist attraction, abounding in tigers, leopards, hyenas, sambar deer, nilgai, bears and jackals, besides a large number of smaller animals, birds and plants.


The artist has used the wild forest setting with a similar Mandana treatment in this composition called "Ranthambore Dreams". 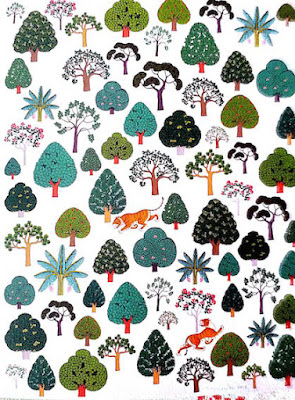 Elsewhere figures of kings, queens, and figures from folk tales and legends have been used, in interesting ways. The compositions have used the "Bundi" method of miniature painting, prevalent in Rajasthan, in the Bundi and Kotah districts.

It is interesting to think of more such possibilities: a marriage of various traditional drawing techniques in India, and themes drawn from urban, modern lives. 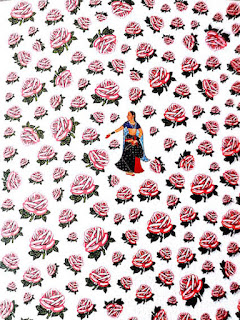