Living in our crowded, polluted urban environments, we yearn to see a bigger patch of sky, trees and bushes of all sizes, or just more open spaces. And trees define and beautify the skyline and the space around our neighbourhoods as only they can. 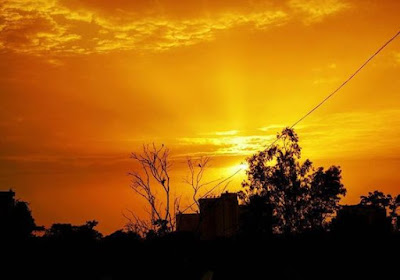 There may be poems about symmetries of trees too, but as an artist I have always marvelled at their awesome symmetry which I am sure contributes to their beauty. 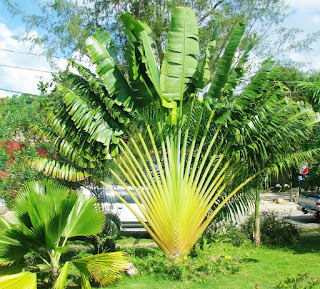 There are spectacular cases of bilateral symmetry in nature, like the Traveller's Palm Trees of Singapore. As per legend, the orientation of the trees in a East-West direction, and the water stored at the base of the leaves were great resources for thirsty and tired travellers. 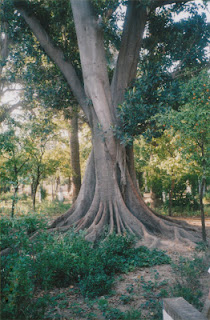 A Ficus tree shows a unique radial symmetry. Which means you could cut the tree in half at different angles, but as long as you cut through the center, the two halves would be identical.

With such a great "Form" bestowed by nature, dead trees are a "thing of beauty" and "a joy forever" too. You feel sad looking at a dead tree in the urban environment, choked as they are with all the buildings around. Often the footpath around a tree is constructed and does not allow the roots to breathe, cables of all kinds mercilessly cut through the branches of the tree; banners, and electric lights are strung across, large vehicles brush past unmindfully, and people nail wooden signages to the trunk casually, not pausing to wonder if the tree was still alive! 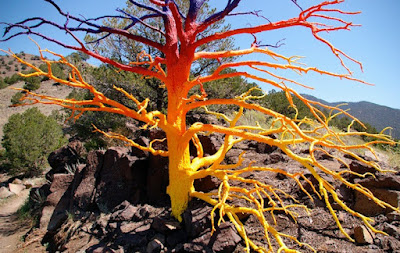 All this for trees that ask little of us, purify our air, beautifies the surroundings, add moisture to the air; and all parts of the tree like its leaves, twigs, seeds, fruits, and even dead stumps are all useful.

The artist Curtis Killorn in Colorado has been painting dead trees in spectacular colours. He says he paints them so that they don't blend into the live trees around them, and people notice how beautiful they still are. 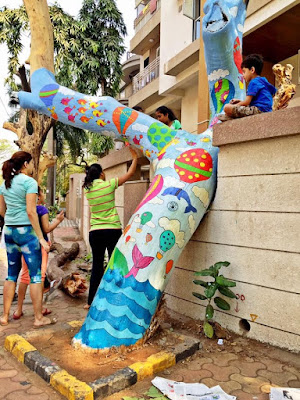 Three young women in Mumbai with a mind of their own, similarly started painting dead trees in Mumbai, for a different reason. They wanted to draw attention to the number of trees which had been dying on the streets of Mumbai due to lack of care, and instead of providing shade and shelter to the citizens, were hardly visible with the city rubble and hustle-bustle. The group called "Rastaa Chaap" (meaning "Street Wanderer", literally) has painted dead trees in bright colours to draw the attention of citizens and municipality authorities, to these dead trees, which would otherwise have been quite invisible.

Here are some pics. 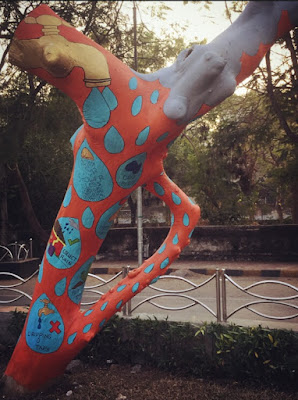 Some celebrity participants (Twinkle Khanna) and funds from NGOs and corporates have helped the group. They plan to take the movement to other cities. And of course, hope that this will launch public awareness, funds and efforts to save the live trees!
Posted by Mita Brahma at 12:05 AM No comments:

An art camp with 200 artists is bound to generate a lot of creative energy and excitement. That is exactly what happened last weekend at Gurgaon, when artists from all over the state of Haryana congregated for a collective exercise. It was a two day affair, with music, theatre, art, food and friends. 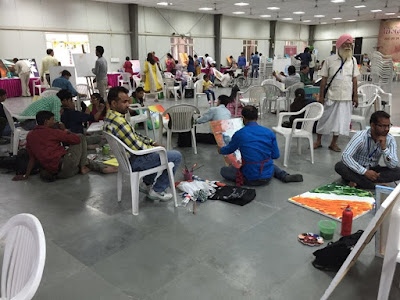 The artists were provided with paints, canvasses and all the supporting logistics for painting.

Numbers being large, every body spread out their canvasses on easels, against walls and chairs, on tables or just on the floor!


Artists worked, chatted in groups or watched each other paint. It was a great way to get in touch with other artists in the state, and get familiar with each other's styles of work. 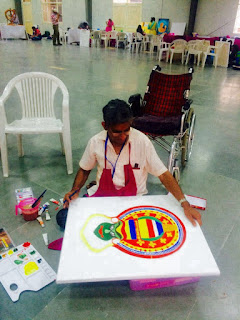 The organizers had set a broad theme to the workshop. They wanted the paintings to be on a similar theme of showcasing the talents of the state of Haryana and the Indian nation to rest of the world.

India is a diverse country and this broad theme meant different things to different people.

Here is a young artist working on the theme of Kathakali dancers of Kerala. Kathakali is an ancient dance form, and uses stunningly elaborate and colourful costumes, a detailed make up routine that takes hours to apply and characteristic head dress. 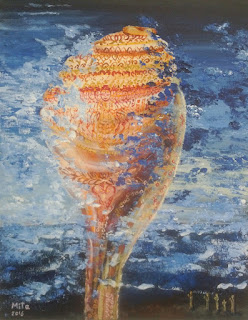 I depicted the "Shankha" or divine conch of Vishnu in this composition. The "Shankha" or white conch shell, when used as a trumpet, has a significant role for the Gods, as a trumpet for various mythological wars, and in religious functions as a divine note.

The Shankha is one of the main attributes of Lord Vishnu, and is an auspicious symbol in Hinduism as well as Buddhism. 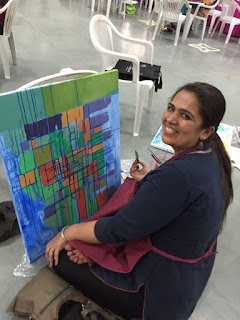 There were several styles on display at the workshop. And here is a young artist using geometric lines and forms.


While most people used Acrylics which was the material supplied, some teamed it up with the use of charcoal, pencils, pens and water colours. 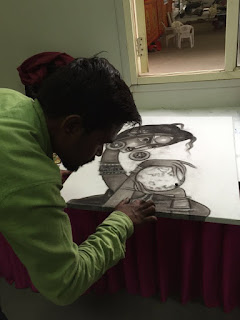 We have all made a lot of friends at the Art Camp, and thanks to technology, will continue to be in touch with each other.

Looking forward to more art camps and maybe with the use of technology, some "networked" and more international ones?
Posted by Mita Brahma at 3:03 AM No comments: 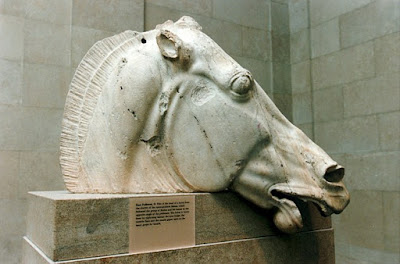 White has been the colour of peace, calm and purity across cultures. The grace of a white marble sculpture cannot be obtained by using colours.
The different shades of white set off the differences of form or texture in a much more subtle, refined and gracious way than any amount of colours could have, as in the famous Elgin marbles and other Grecian sculptures.


A group of artists held an exhibition of contemporary works recently titled "White on white", using visuals, sculptures and installations, at the NIV Art Gallery, Delhi. The compositions were stark, simple and minimal.

The exhibition curated by eminent artist Shobha Broota, was a visually profound experience. Her words about the exhibition, displayed here, capture well the spirit of the event:


Here are some representative compositions from the exhibition: 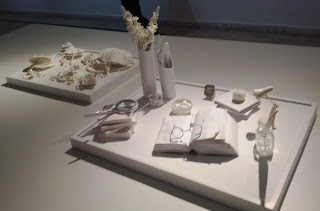 This one had a collection of everyday objects, as you would see on a study table, or on a dressing table, all in white.

Having them all in white emphasised the relative forms and spacings of the objects in a much more significant way, and also showed all the various "shades of white". 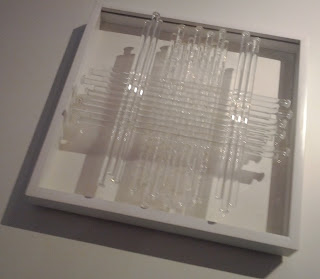 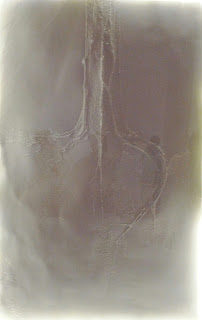 A white fabric, white threads and a white board, was all that was used in this composition of a tree. The constant outward growth, the formation of tinier and tinier branches and the surge of life in a tree, were all visible in this strong, silent composition. 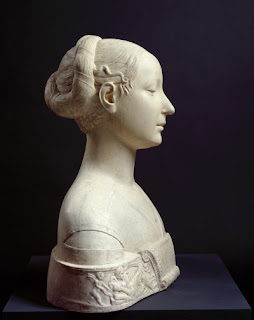 It was an interesting exhibition, and thought provoking. I thought about the fifty shades of white and more, one saw in the clouds, on snow and ice, in the marble of the Taj Mahal, or in fluffy balls of cotton. It is only the textures, the shadows cast by the various layers and forms that make beautiful compositions.

As in this beautiful marble bust of Ippolita Maria Sforza. It is the white on white strands of hair, and pure form of the face and neck in white, that make this sculpture so incredibly beautiful.

Looking forward to seeing more such contemporary experiments in the various shades of white.