The mystery of Ginkgo


The ginkgo is called a living fossil, and is recognizable to similar fossils dating back to 270 million years! There are some ginkgo trees 2500 years old. The tenacity of the ginkgo tree is best described by the fact that six ginkgo trees that were in the 1-2 km range from the 1945 Hiroshima atom bomb area were some of the few things to survive! Though somewhat charred, they revived to tell the tale. 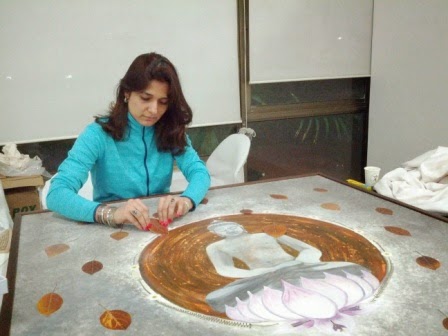 Artist Sundeepa is understandably enamored by the ginkgo tree, and most of all, its unique fan shaped leaf.


The leaves of the ginkgo are unique: they do not have the usual network we are familiar with.

Two veins start at the vein, and keep forking out, and spreading out into the fan shape of the leaf. 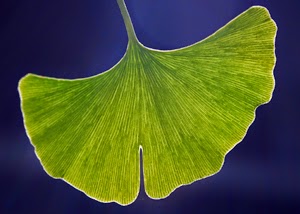 Sundeepa uses her huge collection of ginkgo leaves to add an interesting colored and textured background to her compositions, and sometimes in the main composition itself.

She has a wide variety of colours to choose from. The ginkgo leaves turn a lovely gold in autumn and fall in a heap on the ground. Sometimes all the leaves fall within a few days! 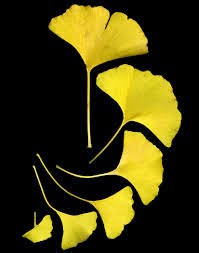 Sundeepa's compositions are usually woven around the central theme of the Buddha, and some of them are purely to celebrate the colours and shape of the ginkgo leaf.

While the ginkgo has been with us right since Jurassic times, several variants are now found across the world, with slight differences in shades of the leaf. So they provide sufficient material for Sundeepa's palette.

Ginkgo trees are large and majestic, and it is easy to see why there are so many stories around them. 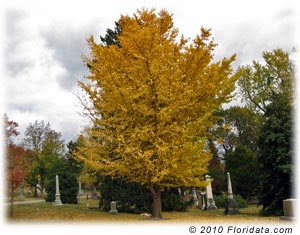 It was good to see them being presented with an artist's perspective. The exhibition is on at the Habitat Center, Delhi.

The viewer gets to see a different style of paintings. And also, comes away with a heightened sense of the mystery about the ancient ginkgo.
Posted by Unknown at 8:40 PM No comments:

Stardust in your eyes


"We are all made of stardust," says Sabyasachi Gosh. His works take you to the beginning of time, which the artist interprets as a fluidity and formlessness. He depicts this formlessness in vibrant bold colours, with a technique of his own, using acrylics and oils on canvas. 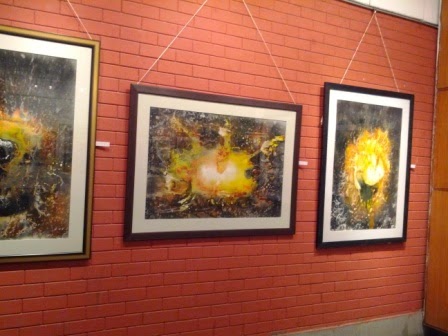 The colours mix and flow into one another in wondrous ways, creating mysterious images.

The exhibition of Sabyasachi's works at the Habitat Centre, Delhi, has three distinct areas. One area contains abstracts inspired by the cosmos, and the process of creation of the universe.


The other area focuses on types of "terrain". Apart from several interesting textures, this section has many interesting compositions, like this one: 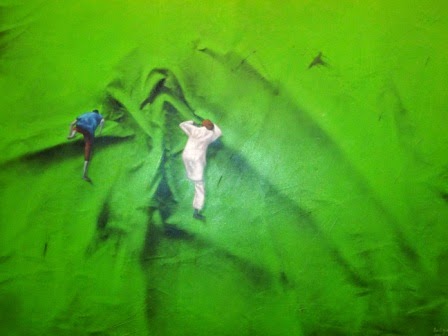 You can see two figures- one young and one old, trying to rip into this huge green textured area, and of course, the rest is up to the viewer's vivid imagination.

The third area has all sorts of interesting portraits, like this old man with his thick glasses. 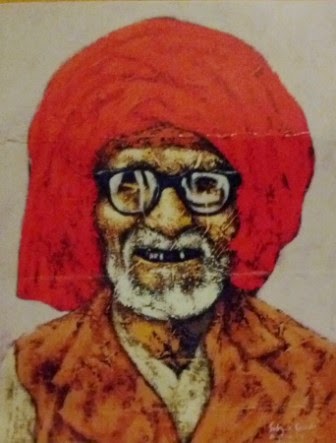 There are quite a few such unique characters in this section.

The artist is based at Agra, and the exhibition showed his huge range and mastery over the medium.
Posted by Unknown at 5:36 AM No comments: