Art for a Cause

I had written a post a couple of years back about street art focussed on road repairs, that would draw the attention of politicians and bureaucrats. This was in the city of Yekaterinburg in Russia: 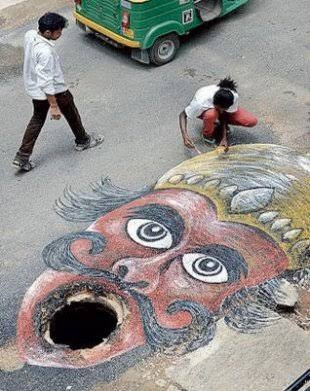 Something similar seems to be happening in our Indian cities as well. There is a rich mix of potholes, manholes, open drains, litter and debris in Indian cities to provide creative minds a canvas.

Some artists are using the opportunity to make a small contribution, make citizens and bureaucrats more aware, and raise the aesthetic quotient of the city!

Here is Indian artist Badal Nanjundaswamy's work around a pothole in Bangalore, drawn like the mouth of Yama, the God of death.

In Mumbai recently, a woman biker lost her balance trying to avoid one such pothole. She got crushed to death as she came under the wheels of a truck in the process.
(http://indiatoday.intoday.in/story/mumbai-woman-biker-crushed-to-death-pothole/1/1009147.html) 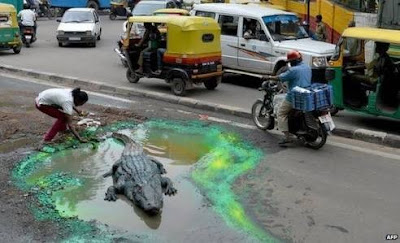 The event sparked an outrage in Mumbai and in the rest of the country.
But not much else happens.....

Here is another one of the artist's works.
He is also called the "crocodile artist" because of the ease with which he draws crocodiles in a three dimensional fashion. 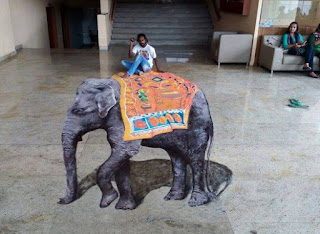 Nanjundaswamy is in fact rather good at street art, drawn with a three-dimensional view of animals.


Some examples with elephants and peacocks, other favourites of his, are given here. 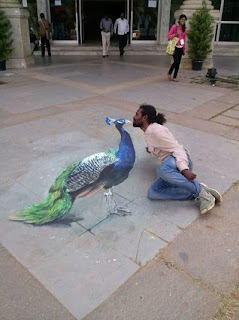 Apart from making pedestrians stop in their tracks with the 3-D compositions, Nanjundaswamy has been able to get the city authorities to take heed on long due repairs. 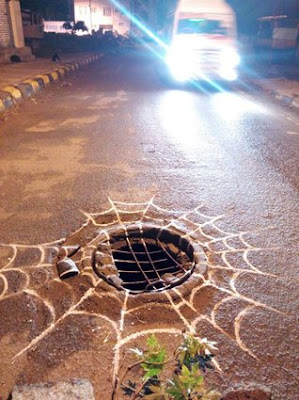 For example, a drawing of a spider web really brought the point home for this manhole, and it got duly covered.


We are used to see various construction materials related to roads, overhead bridges, pavements or plant-holders just strewn around the road. There is never a thought about the user on the rad.

One such pile of road dividers lying around in its usual fashion got fixed with this unusual composition by Nanjundaswamy. 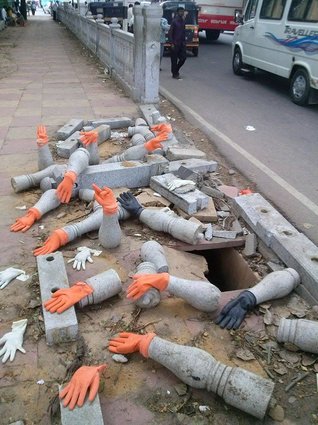 There is a lot of work to be done to showcase all the potholes around.


Mumbai citizens have started uploading photographs of the more "arty" potholes, hoping for some action.


Here is one opportunity: ten manholes, all with varying sizes and textures! 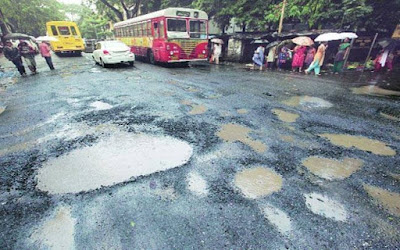 (Pic of Mumbai manhole from:
https://www.scoopwhoop.com/mumbai-potholes-are-goddamn-works-of-art/#.ozk1pn11u)
Posted by Unknown at 11:53 PM