Well, that is what happened in the city of Yekaterinburg, the fourth largest city in Russia, named after Yekaterina, the wife of Tsar Peter the Great. The city is the industrial and cultural center of the Ural Federal District, and public transportation in the city includes the metro, trams, buses and "trolley-buses".

The citizens in Yekaterinburg were not very happy with the state of the city roads, particularly the size of the pot-holes and made use of street-art in a novel way. Almost overnight, some of the larger potholes on the roads were used for remarkable street graffiti. Caricatures of prominent politicians in charge of and accountable for road repair were drawn cleverly around the potholes. 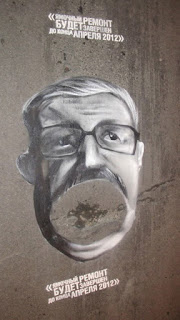 The faces were those of recognizable prominent politicians like the governor, mayor and deputy-mayor of the city. The portraits were also captioned with quotes from past speeches of the politicians promising to fix the roads.

Needless to say, the faces drew a huge response from the general public and the politicians alike. Action was swift, and the potholes with portraits around them were quickly painted over. 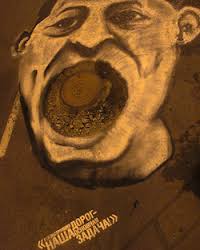 The vigilante artists were ready, and had filmed the entire process. Their response, equally swift, was to paint captions saying "Painting is not fixing it".


The artists seemed to have won the day, as the next lot of workmen who came, repaired the potholes. Taking no chances, they also repaired all the other major potholes in the city. 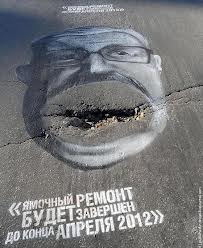 The advertising agency that ran the street campaign got their share of recognition, winning awards in four different categories at the Cannes Lions International Festival of Creativity, 2013. The citizens benefitted too as a special project called "Ura.Ru Roads" was launched, where citizens could upload details of roads that needed repair, and action was now more prompt!